Your improvement season as a basketball player is from April to September. This is a great drill to incorporate into your workouts during those months.

This is a great guard/wing attack drill that allows the player to work on catching and bouncing on the move.

This drill is best with multiple players goin at once alternating lines. Each rep begins with the player whose turn it is passing to the coach across half and receiving the ball in full stride to attack the hoop.

These drills should be done on both the right and left sides. Also, have the players change up their finishes. 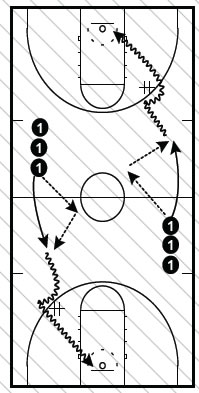 Rep 1: After receiving the ball back from the coach the player attacks the chair located on the three-point line with one dribble.

The player beats the chair with an in-n-out dribble and uses 1 or 2 dribbles to finish at the basket. 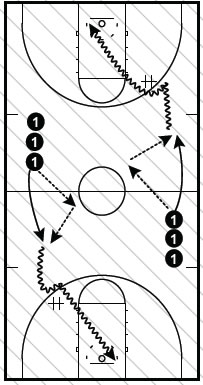 Rep 2: On the catch back from the coach the player attacks the chair with one dribble then crosses over in front of the chair to a 1 or 2 dribble finish on the other side of the basket. 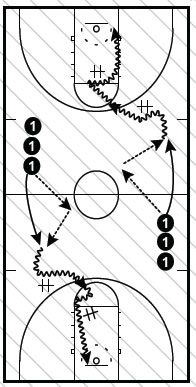 Rep 3: After catching from the coach the player attacks the chair to a crossover, then with 1 dribble in between crosses over at the second chair to finish on the same side of the hoop. 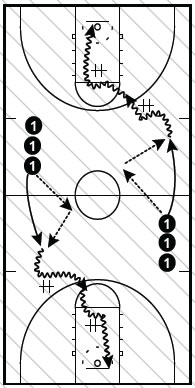 Rep 4: On the catch from the coach the player attacks the first chair and crosses over, then after 1 dribble uses an in-n-out dribble to get around the second chair for a finish on the opposite side of the basket.

we hate to see you leave!

We appreciate your time. Enjoy the 366 Daily Inspirational Thoughts for Coaches E-Book for FREE!